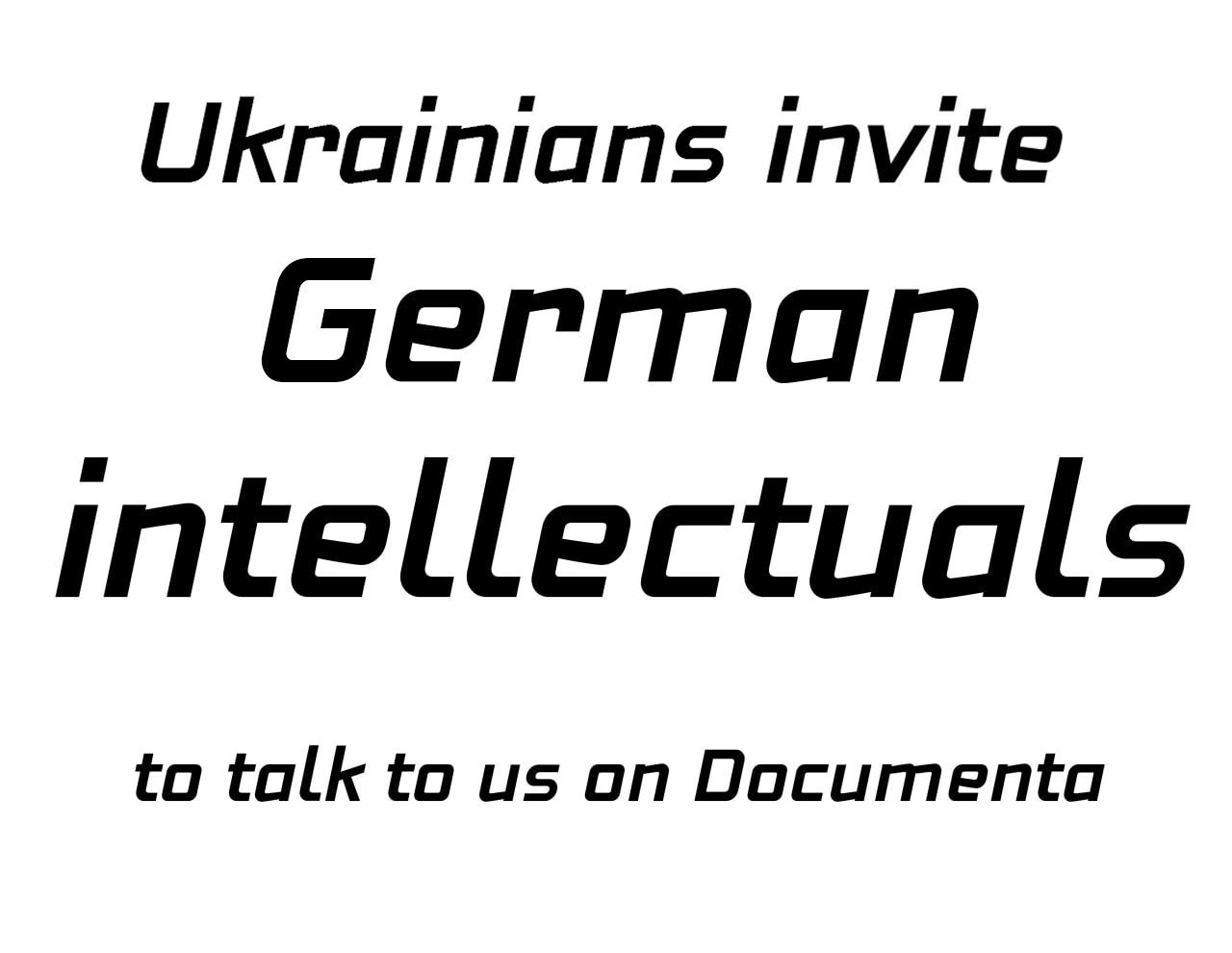 We are going to documenta fifteen and want to talk with you about the war in Ukraine. Our team of Platform Tu from Mariupol is honoured to invite the German academics who have signed the “Open letters to Scholz” about ceasefire, to participate in the discussions of various faces of russia’s war of aggression against Ukraine during Documenta 15 in Kassel. The discussions will be moderated by Larysa Venediktova. Ukrainian intellectuals participating in the program will be released soon.

We want to challenge the authors of open letters published during the last 3 months in DIE ZEIT , EMMA , and Berliner Zeitung into coming to Kassel and talking to Ukrainian intellectuals between 27th and 29th of July. We will have talks about weapons and identity, decoloialism, nationalism, freedom, totalitarism, westsplaining, and you can come and publicly express your point into our faces. Talk WITH Ukrainians, not ABOUT us.

We also accept applications from other German intellectuals willing to talk with us on these topics. We hope that philosophers, artists and professors are not only able to write about us, but also to talk about it with us in person. Please fill in the simple form if you are interested: https://forms.gle/SyzuQRHSzpF4uXYj6

Platform Tu is (was) the art space in Mariupol, Ukraine, that was opened in 2016 and closed in 2022 when our city was exterminated by russians. Our mission was to promote human rights and freedoms through grassroots culture and arts. Since the beginning of russian war in Ukraine in 2014 we were living next to it, and after the invasion this year we barely managed to survive under the bombing and evacuate our team.

Larysa Venediktova is a researcher, choreographer, curator from Kyiv. In March she joined the territorial defence battalion to protect her city. Larysa will be moderating the discussions of our “Citizenship Ukraine” program on Documenta-15.

Other participants and guest speakers from Ukraine will be announced soon.

We are going to the Documenta festival as a part of Ukrainian delegation consisting of Platform Tu (Mariupol), Kultura Medialna, (Dnipro), Garage 127 (Kharkiv), and Totem (Kherson), with the 3-day program “Citizenship Ukraine” that will take place 27, 28, 28 of July in Kassel.

We are grateful to our dear partners ZK/U – Zentrum für Kunst und Urbanistik for the invitation to Documenta.

Link to the registration form